Once a year, I receive a letter from the Authentic Bonnie And Clyde Festival Committee, informing me that their authentic festival will again be held in Gibsland, Louisiana. I never go, but I always look for the letter. I don’t know why. Probably just to see who’s in charge and who died. Maybe an interest in seeing what oddity or monstrosity they’ve cooked up this year.

Many people don’t know this, but I’m a secret Bonnie and Clyde specialist. Maybe even an authority. They were only common criminals until 1967, when the popular movie featuring Warren Beatty and Faye Dunaway made romantic lawbreakers out of them. The movie—and the criminals–caught the country by storm. We may have viewed them as some sort of heroes. Well, they weren’t. Most people got over it and went about their business. I stuck with them.

In the last fifty years, I’ve probably read every book and magazine article about this pair, several of them more than once, because I forgot what was said. I’ve stood at both of their graves in Dallas TX more than once. I’ve corresponded with and talked to the late Ken Holmes Jr., who was a highly-regarded authority on B&C, as well as the late Boots Hinton, who was the son of one of the six lawmen who killed them. I could write a book, and probably should have, just to be done with them. It’s not like I’m obsessed. I was obsessed for a year or two. It just feels like if I stop at this point, it will be a waste of knowledge. Maybe that’s why they’re the subject of my column this week.

The annual festival letter says just about the same thing it always says. They’ll have five (count them) five re-enactments of different robberies and shoot-outs committed by Clyde Barrow, Bonnie Parker and the Barrow Gang. Mind you, the population of Gibsland is only 953 and none of these robberies occurred there. So I guess they do most of these at the bank. If they have a bank. One of these will be a re-enactment of the actual ambush and death of Bonnie and Clyde. On May 23, 1934, the pair grabbed their last meal at Ma Canfield’s Café and drove about 9 miles southwest on highway 154. Six law officers ambushed them, pumping around 100 bullets into their stolen V-6 Ford, ending the lives of Clyde Barrow and Bonnie Parker. Ma Canfield’s is no longer there, but something called the Ambush Museum has replaced it. Somewhere else in town is The Authentic Bonnie And Clyde Museum. Can’t be far, judging from the population count. I’m not sure what makes it authentic. And how does the Ambush Museum feel about that?

They’ll have a pancake breakfast at the Lions Club, suggesting surprise visits by “outlaws” and advising me to not miss the excitement. I think I will. It says the “streets will come alive” with the sound of guns firing. Not sure I’d enjoy that. I don’t want the streets to come alive. I want to stay alive for a while.

There’ll be a $50 prize awarded at a Bonnie And Clyde Look-Alike Contest. I guess that’s something someone on the committee suggested. I would have voted against it. But it says here, there will also be a $25 prize in a Bonnie And Clyde Look-Alike contest for children. That just seems wrong on a hundred levels. Does that mean what they looked like when they were children, or does it mean little tiny people holding machine guns?

Nothing about this festival is authentic except the dirt. A lot of it is probably the same dirt they had in 1934. They don’t even have the stolen V-6 Ford. There are apparently several fake “death cars,” the most popular being the one used in the 1967 movie. The real one sits in a Primm, Nevada casino, properly cringe-worthy with its Swiss cheese exterior.

The letter always reminds everybody that they “do not glorify crime or criminals.” They say they are devoted to “preserving history.” But they make sure there are plenty of t-shirts, buttons, mugs, koozies, shot glasses and magnets for sale. So I don’t buy the “preserving history” thing. It sounds like the only thing a little town of 954 has got going for it, so I don’t begrudge them their festival. Each year when I receive 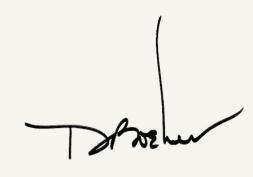 their letter, I consider getting in the car and driving to Gibsland. I always decide against it. Maybe one day I’ll go, but it won’t be on The Authentic Festival day. I’d like to stand by myself on that highway southwest of town and imagine. I’ve read the books. I know what happened. I think my imagination would be more interesting than seeing people standing around with their t-shirts and koozies. Maybe one day I’ll go. Maybe one day I’ll buy a magnet.